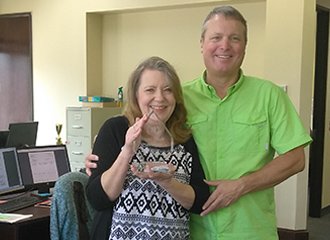 Pay4Freight began operation 10 years ago this past March.  Along with that, the company’s first employee, Diana Wright, was hired on June 24, 2008, making her the first 10-year employee with the company.

Diana has just about done everything from the beginning to now: verifying and processing invoices, cash application, funding clients, and customer service during peak times.  Diana has seen it all— from our humble beginnings of the first office in a small retail center in Lewisville, Texas to where we have our offices now in Flower Mound, Texas.

Diana was also the winner of the Mission Statement contest we had 4 years back, “Our Mission is to assist each carrier’s success through a Team committed to achieving excellence”.